Here you can discuss what kind of races should be in the game.
Post Reply
313 posts i added some details on the shield, what you think?

Hi
You be a awesome designer now,
I think better then me, but
Daniel said we should make everything a bit
More 3d. So here my suggestion.
And i dont like the weapon of the berserk!
Patroid

Oh, i'm not pretty sure about i can add more 3d to this kind of units but i'll try, and feel free to correct them if you think you can improve that 3d requirement
I'm going to work on the weapon of the slayer then, i've got an idea or two,
Age of Fantasy design leader
Top

Here 2 variants with a hammer

2 with a different axe

This building is the Rune Mason
Runes are carvings that dwarven artisans make to give magical effects to their items
In this buildings we can research upgrades for dwarves units that are different from what we cna find at the smith (not just +1 attack and +1 defense) for example we might make techs to allow melee warriors to throw their weapon and make it come back, or add some properties to their blades (fire damage, explosions for area attack or stuff like that)
This building could also train superior workers (Rune Masters) that can build and use spell.like abilities

Could you think of a variant of this for other races maybe?
Like a sacrifice pit for orcs/undead

Or do you want it solely for dwarves.

Also, to make units 3d you need to add shadow on the actual unit, not beneath it. For example, if you look at Patroid's guy's shield closely, you can see it gets darker the further right/downwards. This gives a spherical 3d effect. Hope you understand, and that this will make you even better at making units!
Top

I can think to other stuff for other races, but this one is just for dwarves (imho) because they need THEIR form of magic
Age of Fantasy design leader
Top

On subject of magic...
What about a dwarven sorcerer, that has an ability to summon magic walls, which cannot move, disappear after 3 turns, with 1 turn cooldown, seeing as dwarves are defensive...
Look like a transparent blue shield.
Top

More than a sorcerer i'd make a dwarf cleric, that is pretty fit for dwarves. This kind of warding skill and also buffing skills would make them useful, and we might make an upgrade (priest to cleric) that make them become more resilient and stronger in melee For the magic part the rune master is more fit, it would not cast magic like a sorcerer but he would use runes that he carves on stones Here is the priest

I have to draw a priest to cleric icon

The cleric (first one) looks like he has skeleton feet....
The day is coming when a single carrot, freshly observed, will set off a revolution.
Top

How is it now?

What about the rune master?

Ahh, those both look good

The day is coming when a single carrot, freshly observed, will set off a revolution.
Top

I edited the defender to make it more 3D-like

Good distance fighter
best version: a shot is very strong but the musketeer has to reload his weapon the thurn after
when this isn't possible: good infantrist, shoult need 4 turns also
Beserk:

Axe fighter with double-strike ability and a better armor then the Axeman
Dwarven Slayer:

Something like a panzer with an axe, really hard to kill and strong
Bear Rider:

Dwarven Cavalry. Great against any non-mounted unit
Heavy Board Rider:

Dwarven Cavalry. Upgrade for the Boar Rider. Even greater against any non-mounted unit and pretty sturdy
Bombarde:

Dwarven caster. We can research new runes at the rune master to make it use more spell-like abilities
Priest:

Upgrade for the priest. Stronger and with a wider range

About runes you don't need to be locked on the element concept.
Let's say you research a "warrior rune" this one can give a boost to attack
If you research a "fire rune" it gives the rune master a fire attack

At the rune mason you might also research runic weapons. If you research a "fire blades" tech, any unit with slashing attack might gain a burning effect, and so on

here are some real runes 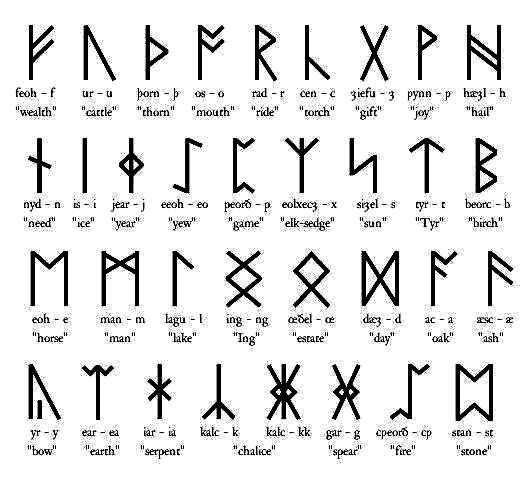 In this image there are meanings of runes

This one is a rune with a healing effect. When you research it it appears in the Rune Master Spell List

This are fire and ice rune from the images above

These are just ideas though
Top
Post Reply
313 posts