by RiverRaider 1097
Ladder Bearer / can be used to assault towers with a movement of 3, with the help of any infantry unit. Ladder Bearer moves up to tower, infantry follows to either attack units in tower or takes over unmanned or abandoned towers, could also be used to assault walls... a pikeman unit could be used but he will be carrying a ladder instead of pike ..unit strength and movement along the lines as a worker

by balint
I kike the take over unmanned tower function. 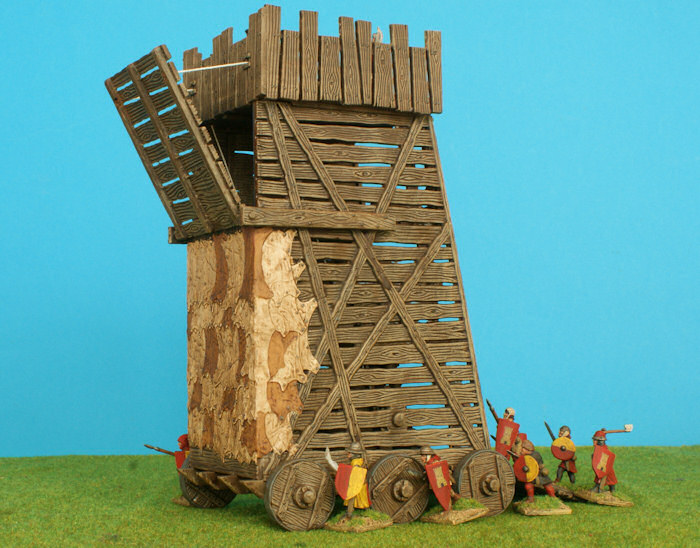 by RiverRaider 1097
Siege towers would be great for the final push to take over the main strongholds, I was referring to the random towers that opponents build that pop up in the middle of no where that are not well defended.

by COOLguy
And ladders are cheaper even if they are less effective.

by count_dcinamon
Well, how about a ladder man? cheap unit, low on health, use for climb or capture the enemy walls maybe?

I havent play the game fully, so dont know if it is possible to climb or get into walls, but maybe it would be great to do so.

Note : pls share ur ideas, and i'll update this if I hv some more detailed ideas

by DoomCarrot
woah, cool idea. Capturing enemy walls.... I think it would be cool if maybe he could convert watch towers/fortresses/tower things as well.

Maybe a very weak, slow unit that has a small chance of capturing a fortification when he climbs it? And if he fails, then he just dies?

by count_dcinamon
But I think its more realistic if they are fast moving unit. I meant, they are basicly a man running around carying a ladder.

And they are not the one who can capture. Maybe they can "build" (its like build, but actually put something) the ladder they carry, put it next to a wall, after that other unit can ocupy the walls.

I know to do this, first the wall it self hv to be made garrisonable, so that enemy cant just occupy the dann wall like a boss but instead fight for it. If the unit that attack the wall from tge ladder won, the wall is theirs.

It will make a more siege like battle XD

by DoomCarrot
I think a complicated garrisoning walls system is nearly out of the question not possible, unfourtanately, if bridges have taught us anything...

by Darkknight
there is an old idea similar as this
http://www.ageofstrategy.net/viewtopic.php?f=76&t=1465

by count_dcinamon
I see.. Well, I think ur idea are goof enough for the concept. Any idea for the unit stats?

by DoomCarrot
tamtam, those stats look good. I think the turn cost should probably be 2-3 though, and give them maybe a 20% chance of taking watch tower, 5-10% chance for fortress/cannon tower?

by rejuvinatedghost
How about instead of all the complicated converging just have him allow infantry to go over the wall itself herby negating its blocking ability?

by DoomCarrot
That is also a possible approach, although some kinks would still have to be worked out.

Like can infantry move through buildings/walls that the friendly ladderman is adjacent to? Or does the ladderman die and give the wall a "laddered" status so that infantry can just go directly over them?

DoomCarrot wrote:Or does the ladderman die and give the wall a "laddered" status so that infantry can just go directly over them?

This may be easier programatically: the wall would behave like a gate that is opened to anyone.
Or did you think ladders would be faction-locked so only units of that faction could use their faction ladders?

Enemy should be allowed to somehow "deladder" that wall segment then, though. Via workers? Their own laddemen (who may not be consumed in this dellader process?

by Belfry777
personally I think the ladder should be built in one turn by a builder.

by COOLguy
This is doable I think

Just realized: The siege tower should reduce all infantry speed to 2. Otherwise the guys could "jump" over the walls from a few spaces away

by Belfry777
Also the laborer should be able to build it.

by General Brave
Sounds good, how should the ladder look like.

by Belfry777
I like a rope with a grappling iron with it. A rope latter.

by godOfKings
a group of 5 to 10 men carries a large ladder up to the top of the wall, a wall with ladder is a transformed wall that is like a tc with one garrison space, any unit can enter it and the player who enters wall will own it and b able to pass through it, other players will have to kill the garrisoned unit to enter wall and own it, in reality archers cannot destroy ladders and only the side which holds position on top of wall can remove ladder at his leisure. (basically a one time use transform spell) walls that r transformed into wall with ladders, cannot b destroyed until u conquer and transform it into normal wall again (after removing garrisoned unit ofcourse) as I watched the real life scenario of conquering walls with ladders in my fav manga Kingdom, this is the most realistic approach for the gameplay

the ladder bearer will have a spell that destroys wall and instantly summons a wall with ladder in its place, and no, u don't need another ladder bearer or worker to remove it, any player who owns the wall can remove it by transforming it


and ofc, mounted units, wagons and sieges cannot enter or pass through them at all

by Belfry777
I like the wall being able to be climbed.

by makazuwr32
The thing is that right now walls are absurdly easily destroyable with infantries.
Maybe if we either completely remove bonuses to walls from all infantries or add to walls more hp this unit will become useful as well as walls themself (both changes don't affect gates).
But right now both walls and this unit are nearly useless.

by Belfry777
True. I was just experimenting with them and samurai can cut walls 3x thick in just about 5 turns. I favor the removing bonuses from infantry.

by godOfKings
r u kidding me? in five turns u can make an archer and a long bow and easily kill samurai, rather walls become harder to destroy wen u hav massive walls, no way u should ask for removing bonus against walls for infantry

makazuwr32 wrote: ↑
Thu Jul 05, 2018 8:38 am
The thing is that right now walls are absurdly easily destroyable with infantries.
Maybe if we either completely remove bonuses to walls from all infantries or add to walls more hp this unit will become useful as well as walls themself (both changes don't affect gates).
But right now both walls and this unit are nearly useless.

I prefer second variant – massively increasing normal walls only hp (not gates and palisades) or even just adding new though walls.
Hp must be 200-250 in base. Also siege weapons must have against it high bonus - castle-like one i think. And ofc they will take more turns to build, not 3 turns in base and 2 with ambidextria.

by Belfry777
Why should a guy with a sword be very good at breaking walls? Yeah I don't think so.
All times are UTC
Page 1 of 2
Powered by phpBB® Forum Software © phpBB Limited
https://www.phpbb.com/